Today we dove into our Support Team (Continuous Services) and found Samuel the Software Developer.

Samuel started as a Summer Trainee in June 2021, and has been with us ever since. His main task back then was the SprintIT internal code migrations. Being almost ready with his thesis, he could finally take on a full-time position as Software Developer this fall, and we couldn’t be happier!

Samuel is a half-swedish whiskey-lover and disc golfer who claims to have a temper but never refuses to help a colleague in need. He loves it when he gets critical and stress-inducing work completed and enjoys a good laugh with this team. 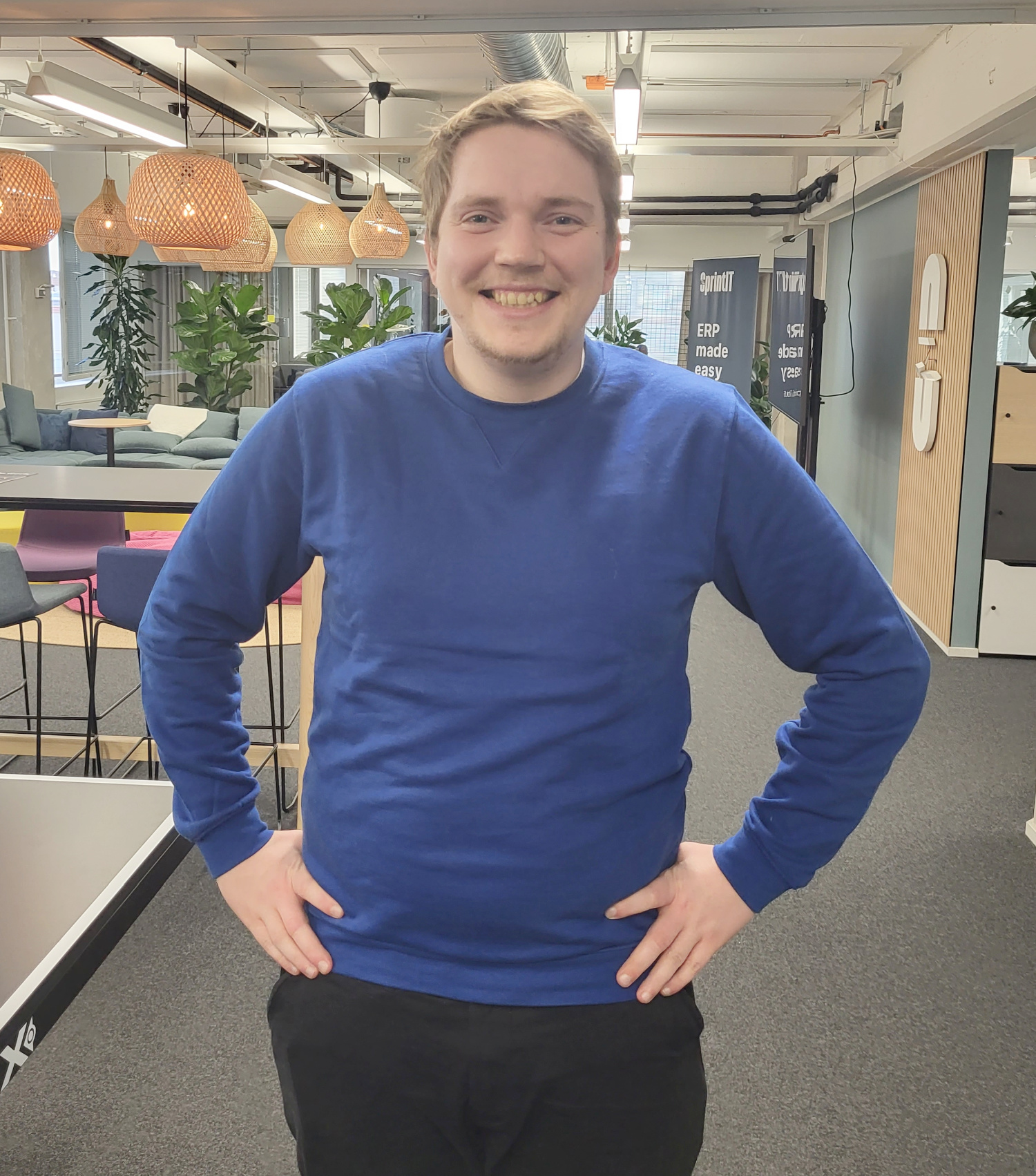 Who are you and where are you from?

I am Samuel Johansson, a Software Engineer, helping people with technical Odoo problems.

I am originally from Lahti, Finland, and currently living in Järvenpää. I'm half Swedish from my fathers side, so I have relatives in Sweden too.

Your current title is Software Developer - what does it include exactly?

Mainly it consists of non-technical advice to clients or very technical coding and server-related assignments or configurations. I have been educated as an Automation Engineer, specialized in software.

What made you apply to SprintIT for a summer job?

The remarkable thing is that the job posting seemed quite down-to-earth with realism and practicality.

Realism is a big deal, right?

Yes. The SprintIT job postings really do reflect the reality of our tech stack, and the culture has realism. I had to go through a code screening coding day and compete with others to show my skills.

What are your best work memories so far?

I'm quite happy that the Summer Trainee related SprintIT migration project went well. Even our CEO Roy Nurmi, in his nonchalant way, praised the project. The real praise goes to Elmeri Niemelä (Software Architect), though, who helped me with his own expertise.
​
Now that we are in the subject of summer of 2021, I have fond memories of the summer party in 2021. The mood was quite welcoming. I have other good memories as well, such as team days with the Support Team, who are quite fun to work with.
​
What makes you happy at work right now?

Some critical, and stress-inducing, work has been completed. Some other work is still ongoing, but the direction is right. Some of the things take quite a lot of time to finish, but I'm happy that I survived some pressure.
​
What was the last time a fellow Sprinter helped you out?

Recently, Petri Heino (Partner, Support Team Lead) has helped me quite a lot. He usually gives me advice on best practices and what to do.

For one, he advised me to present my server related problem in the Technotes Slack channel, where I explained the problem. The next morning Roy called me and reaffirmed that my intuition was right, some ill-optimized code was probably the problem, and advised me to use more server analysis tools to figure out what is the cause for server slowness. As we are solving the problem in the team, we are also training ourselves to handle this issue if something similar happens with other clients in the future. Also Johan Tötterman (Solutions Architect & Senior Consultant) has been of great help in this. 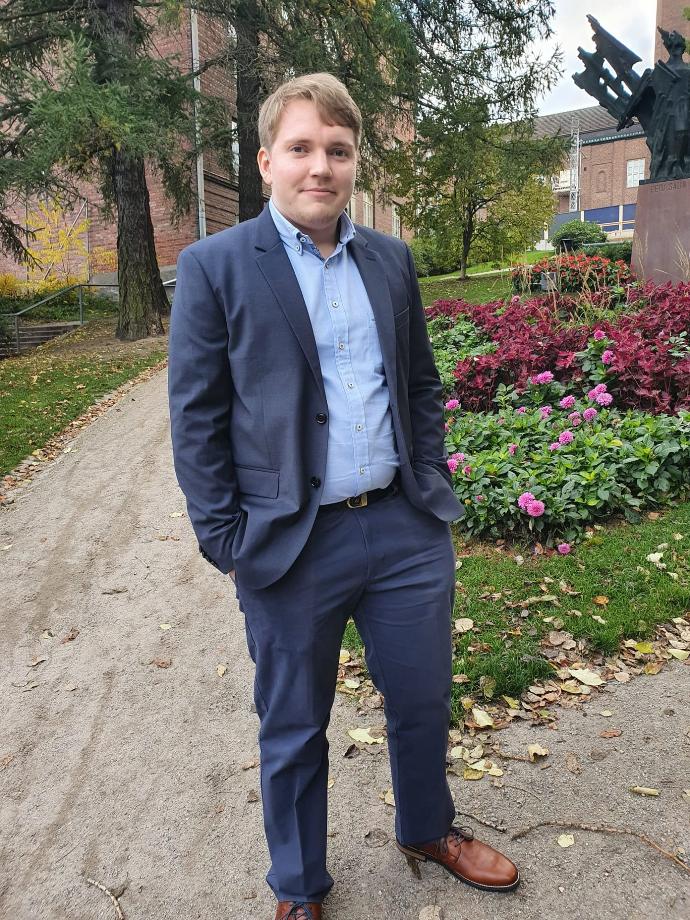 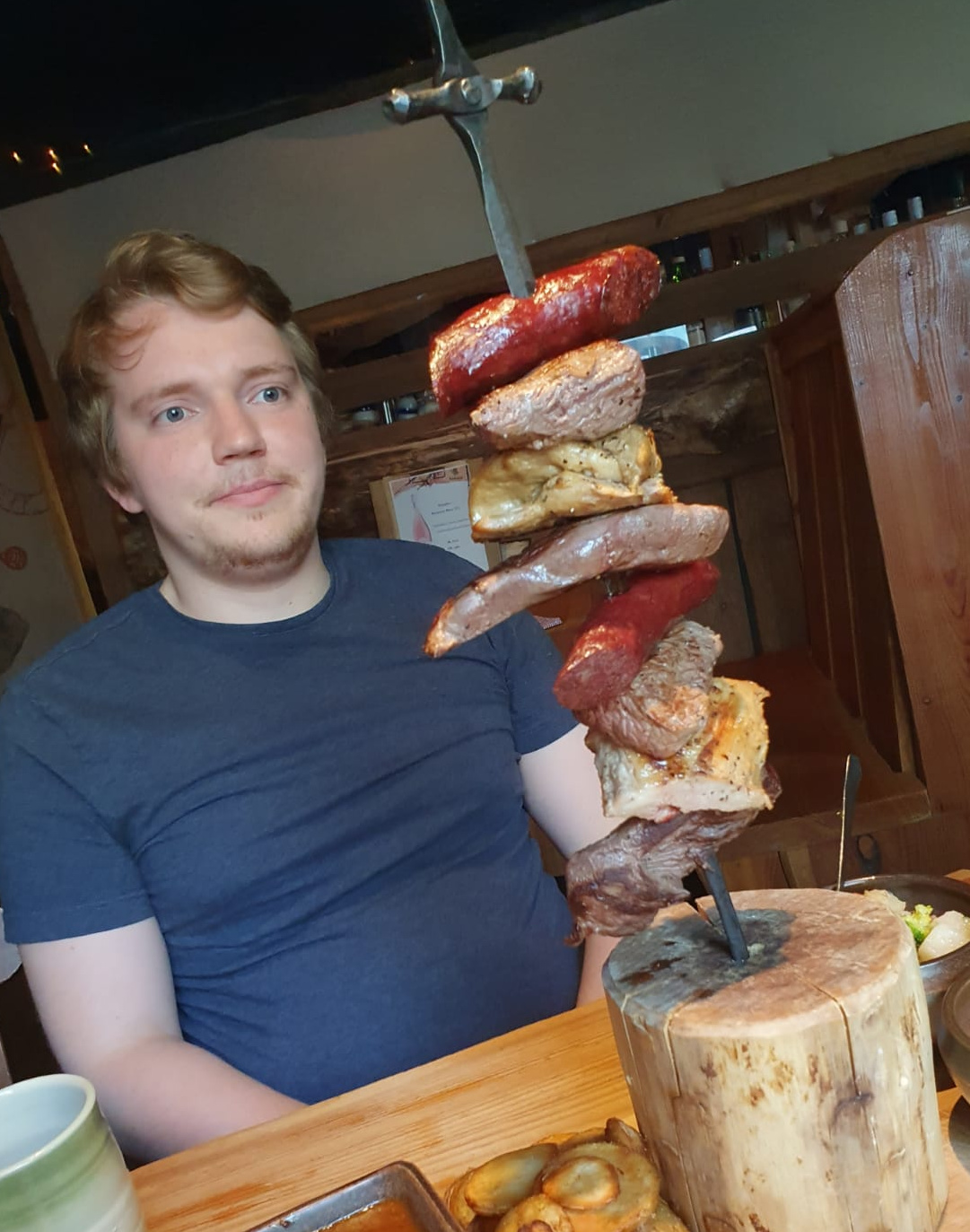 Lots of cigarettes and whisky.

On a bad day it's hard to concentrate on nothing else than the problem at hand and usually these problems relate to social stuff. I have some temper and sometimes my outcries don't feel right, but at least I try to discuss and solve the problems by communication.

Communication is the key! Do you feel we communicate well here in general?

I mean it could always be better.

The best thing is that the atmosphere is good and welcoming and you feel like your questions and answers are quite well received. Also in some cases, even when we disagree we are able to communicate our own view.

[Sometimes I feel like some things could be improved, as at least some Slack/mail/Odoo messages aren’t answered. Reasons might be that the recipient cannot yet answer, do not know the answer or otherwise won’t answer, but acknowledgement of the message would help even when they are yet not ready to answer.]

Usually in the office it is quite easy to ask people and they’re willing to answer. The remote working communication practices need some improvements though but I guess we are still all learning this.

What about your aspirations for the future - you are still quite new but have mad skills already - how do you wish to develop here at SprintIT?

There are many possible routes to advance. My coach Petri Heino is always asking about my preferences and he is very eager to listen - he seems to truly want me to go the direction or learn the skills I want.

Generally the direct route would be advancement to Solution Architect, i.e. a more senior technical expert. Also Project Manager position could be a possibility afterwards, if that was my wish for the future. As the company grows, it can be hard to foresee what kind of positions open up.

Aside from the titles, it has been quite important for Petri to ask what kind of projects I’d like to work in. Currently I'm in technical support, but the door is open for project related, or more differently specialized customer environment related coding, not only support. The important thing seems to be my own preferences and the strengthening of my own skills.

For me at least, the titles aren’t the important part. It is more important what I really do at work and learn from it. My biggest weakness at this point is the lack of experience. What I want is to learn a wide set of skills. This includes the additional knowledge of [Odoo] backend related magic and server related upkeeps or configurations and database management, which I’m somewhat proficient in. Additional technical skills I’d want to learn are front-end related shenanigans and data related migrations and transformations. The non-technical skills to be bolstered are always the communication and related customer activities, as they are critical, but also some project management skills would be good. 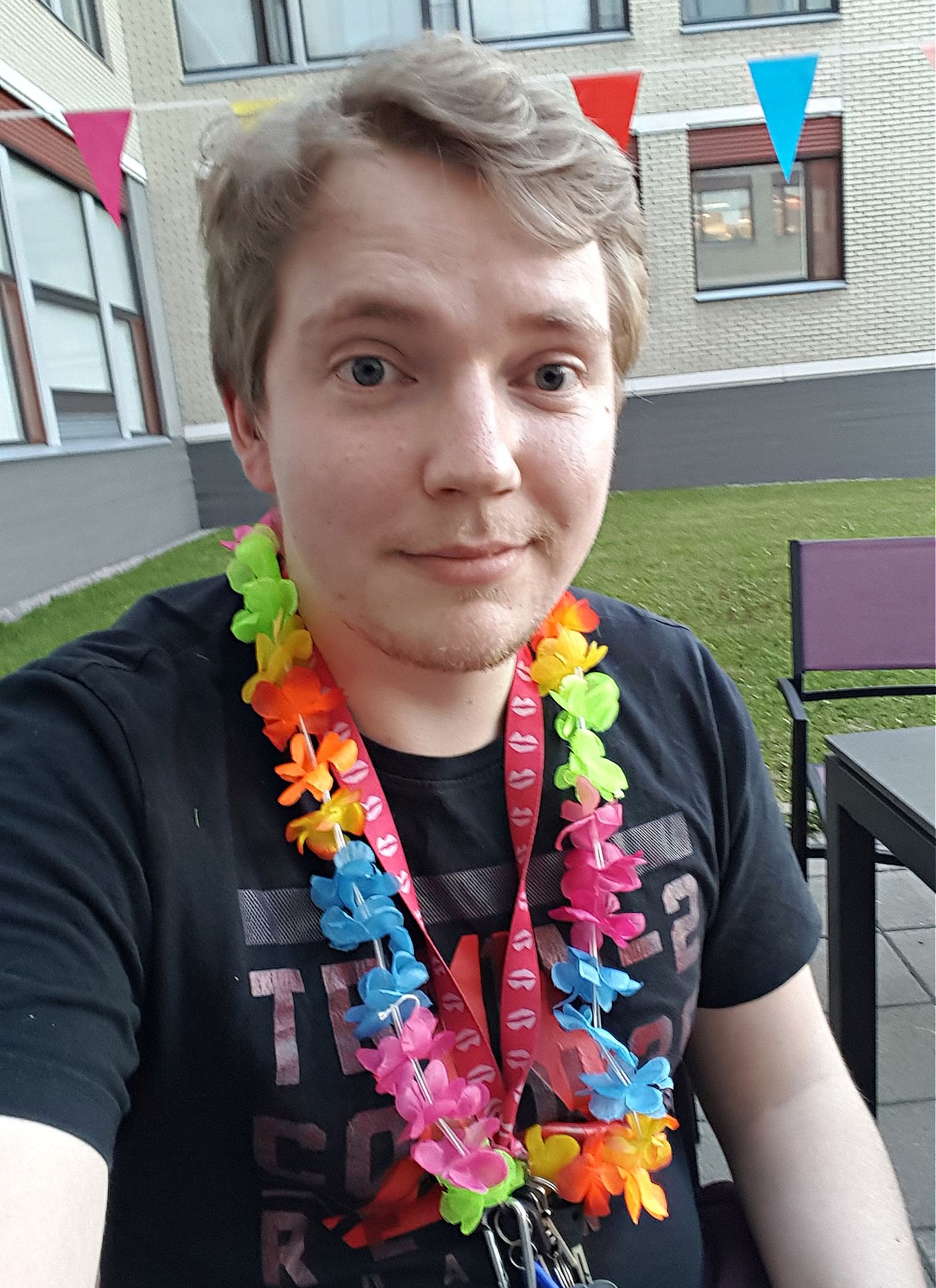 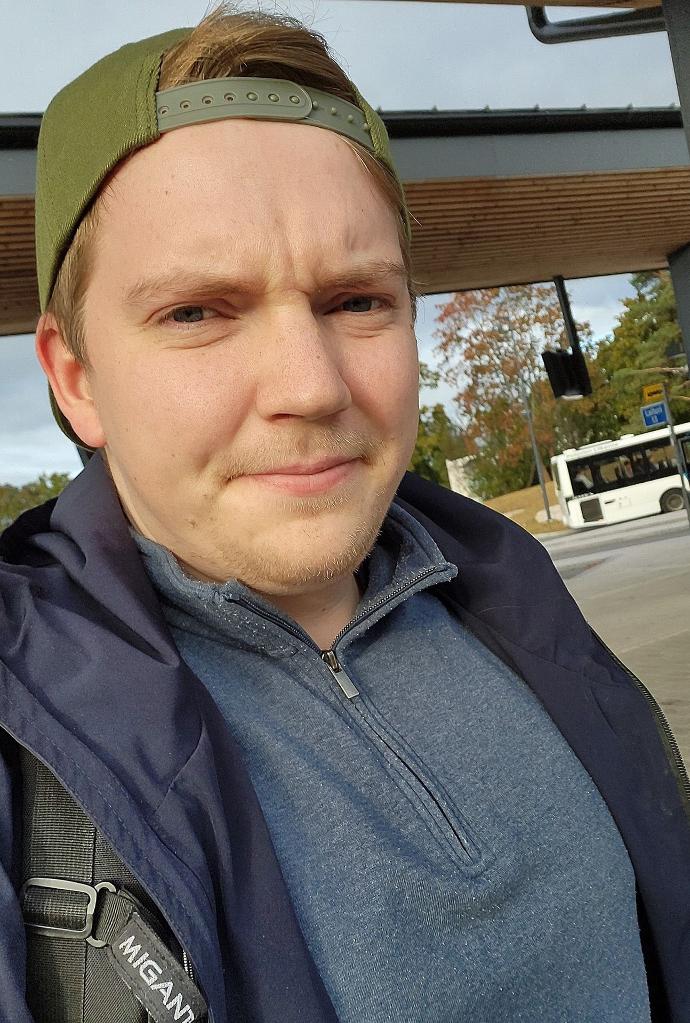 Ok, Samuel, let’s go to lighter topics! Which one of your colleagues made you laugh recently?

Petri Järvinen in our Support Team makes me laugh all the time. He has a very honest way of joking and makes many feel welcomed.

Is there a nerdy stereotype that fits you?

I don't feel like a nerd, but I have many times been suggested to be one. I'm nerdy in the sense that I have always been good at school, I like computers and coding, and I play a lot of games. Sometimes my humor is quite nerdy too, I guess.

Who would play you in a Hollywood movie?

Maybe some intrigue-minded character. I always find the most interesting characters in TV and movies to be the scheming background characters, who have more impact that is appearing to the public.

I really like your answer! But what I meant was, if there was a movie made of the story of SprintIT, who would you want to play you? Brad Pitt, Matt Damon maybe?

Matthew Needham has been quite impressive in “House of the Dragon” as he has played the intriguing character of Larys ‘The Clubfoot’ Strong.

I'll take that! And tell me, how would a six-year old describe your current, daily work?

Lots of talk with others, inside and outside the company. Coding, configuration and investigation work is quite common. Usually it is not quite clear what the problem is, and I have to do extensive investigations to sort that out.

Wow, that’s a lot for a six-year old! Coding, configuration?

And lastly, please finish these sentences!

When you see me at the office, I’m probably… looking at my screen.

I start my mornings… having a cigarette.

My work life motto is… “Nothing is finished”.

Best thing about Odoo is… the clear and well-thought Standard Odoo code base.

You will never hear me saying… "I will not answer that."


Thank you for answering to this interview, too, Samuel! 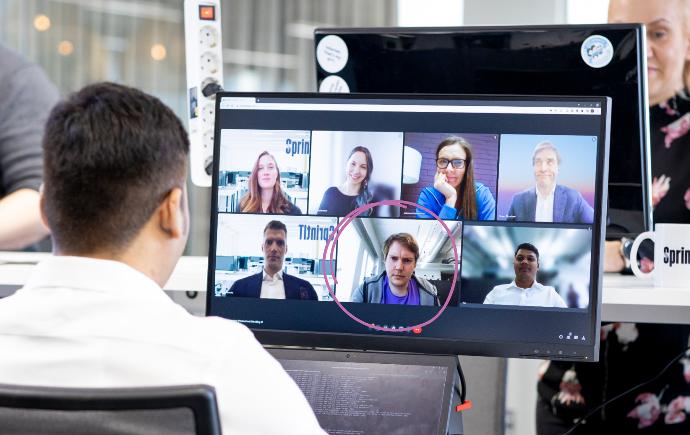 
PS. Want to work with Samuel? See our open roles while you're here.

You can also join us on